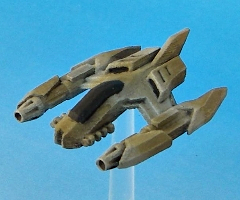 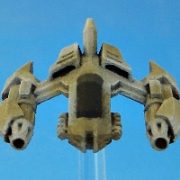 The Dralke is named after a mythical flying beast from the culture of the by-gone Orbital Commonwealth, and not by luck: it is an airborne machine that rains plasma bolts and laser rays on its targets with accuracy and in abundance. The Dralke is slow by flyer standards but it uses this slowness to its benefit, as it allows for better situational awareness and cooperation with friendly ground units. Instead of high speed, the Dralke  -just like Orbital Combine vehicles-  utilizes powerful multi-focal point shield emitters for its survival. An expensive yet powerful tool if used correctly, the Dralke is feared and respected by its opponents as, exactly like the beast it is named after, it is vengeful and relentless.