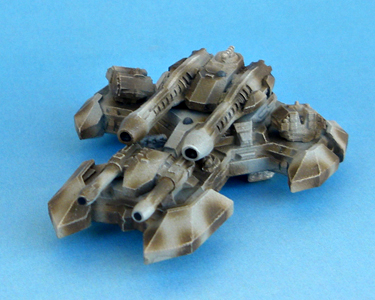 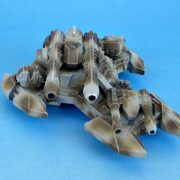 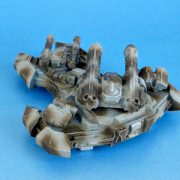 Only 12 left in stock

The Valgaross is an immense hovering technological terror – the pinnacle of Orbital Combine hovertank technology. Driven partly due to the psychological effect of the appearance of the Tigerclaw, and partly due to the actual necessity of having a vehicle that could, indeed withstand the rigors of combat against both kinetic and plasma-based weapons for prolonged periods of time, the Orbital Combine put all their design prowess into the creation of this machine of destruction. The Valgaross is a monster of survivability. Its multi-focal point shield emitters are multi-layered, there is multiple redundancy in critical systems and the hull of the vehicle employs a network of AI-controlled nano-repair matrices that can repair damage on the go. Its main ordnance consists of twin ultra-heavy plasma destructors which are complemented by an assortment of secondary weapons. Although it has been criticized for its lack of long-range weaponry, the Valgaross is formidable both in attack and defence.